Good evening everyone! How is everyone on this fine Tuesday night? I'm settled in for the night. The Penguins just won there 13th in a row and I'm watching the Rangers/Flyers rivalry continue. What games are you all watching?

Also, if you didn't notice I've updated the blog's look. I just wanted to update to a cleaner, more sleek and modern look. 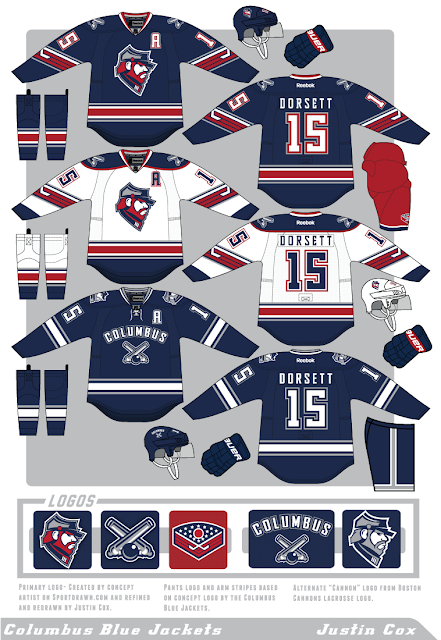 I wanted to give the Blue Jackets a full rebrand! Starting with the logo. A star with a backwards Ohio flag? Creative, yes, but it doesn't really relate to their identity (other than the fact they're from Ohio) and and it doesn't work that well as a primary logo. The primary logo I used for my rebrand uses the head of a soldier. A "Blue Jacket." It's fierce and relates to the identity. The original logo was designed by a concept artist on SportDrawn.com. I took a screenshot and printed the logo a while back but unfortunately the post got deleted from SportDrawn so I didn't get the name of the artist. Here's the original logo, though. The shoulder patches are two crossed cannons to further incorporate the military theme. The cannons are from the Boston Cannons lacrosse logo. For the jersey design I went with a more modern look while keeping it classic. I also went ahead and used the stripes from the Blue Jackets "stripes and sticks" concept logo. I thought it looked good as arm stripes and reflected a military patch that would be featured on a soldiers jacket. Then we go onto the alternate... I wanted to keep it much more simplistic. I removed red, kept classic simple striping, and the rest is pretty self explanatory. I apologize for the long description but I'll let the jerseys do the rest of the talking.

Let me know what you think in the comments and thank you for stopping by!

Hello again everybody, and welcome to the Art of Hockey! New concept time... again! Let's dive right into it! 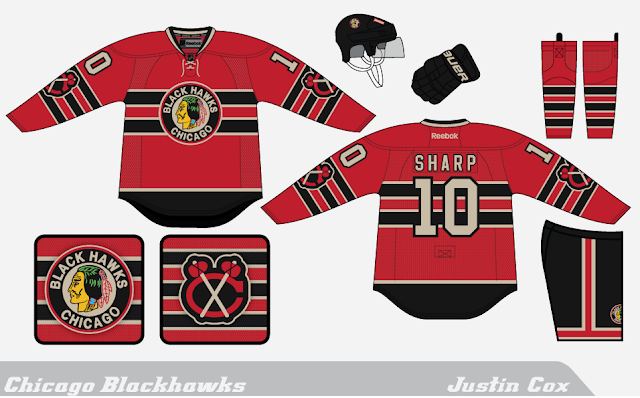 One of the most popular concepts is Blackhawks third jerseys. And most of the time they're retro inspired, black jerseys. This one is retro inspired, but I decided to ditch the black and go with a red jersey. I have always though that the vintage white and black looks phenomenal atop that Chicago red. That's just what I did here. My concept is largely inspired by two concepts. A retro concept by Avi S. and a Nike swift concept by Dylan W. Both artists placed a roundel logo atop two separate stripes rather than the large chest stripe or the plethor of stripes across the jersey. I then wanted to further incorporate the retro feeling by adding the tomahawk 'C' logo on the arm stripes like the Hawks jerseys from the late 50's. I would love to hear your thoughts and comments.

Thanks again for stopping by and have a great day!

Bringing the Mountains back to Colorado

Good evening everyone! It hardly seems like it with the new time change. As you all know, I'm a huge Avalanche fan. I was born and still live in Colorado, attend games regularly, and I'll always be an Avalanche fan at heart. In fact, just the other night I was in attendance to witness the Avs break the Blackhawks winning streak. It was such an awesome game to be at and such a great win for my boys in burgandy! But that burgandy uniform... it needs a change ASAP... that's where today's concept comes in! 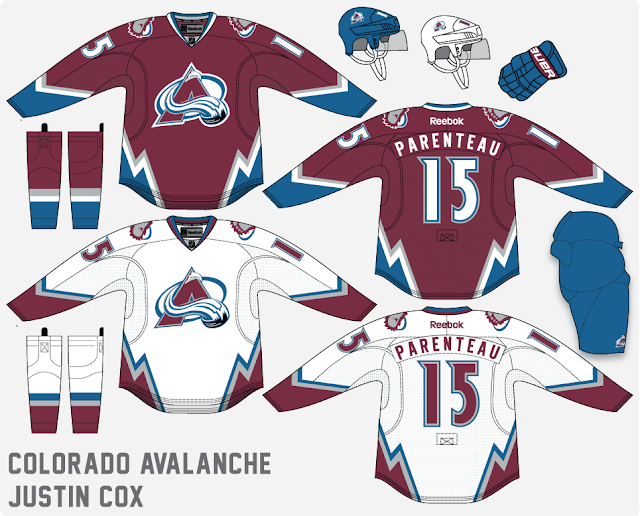 Over time (although not in a long while) I've created tons of Avalanche concepts. The most popular one most people create, is a modern version of their old 'mountain' design. I had a few goals here:
Overall I think it completes my main goals and would be a solid set for the Avs. What do you think?

Thanks for stopping by! Enjoy your Sunday evening! -Justin