The Stars and Stripes of DC

Hello everyone! I'm back with another concept today. 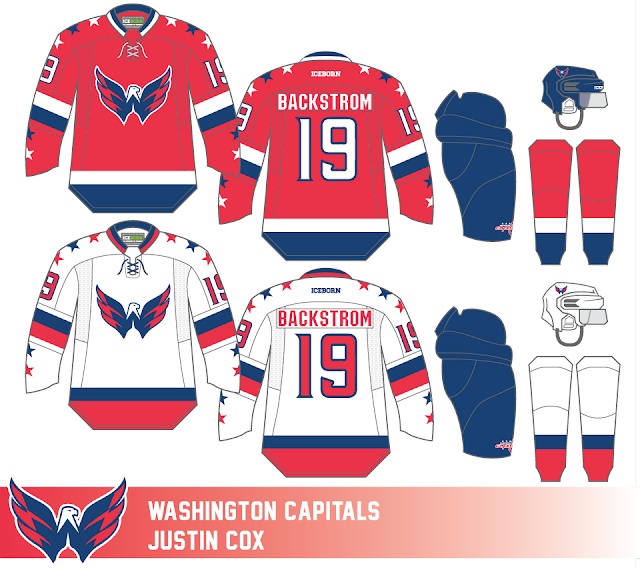 The Washington Capitals are one team that are in need of a redesign and here's what I have in store for them.

- Design loosely based off of original uniforms. Thick stripes, but remove the small space in between. Add stars on shoulders and arms.
- Updated font.
- Bold design returning red/white/blue stars and stripes.
- USE THE WEAGLE LOGO AS THE PRIMARY.

So, what do you think of this Capitals redesign? Let me know!

Thanks for stopping by and have a great weekend. 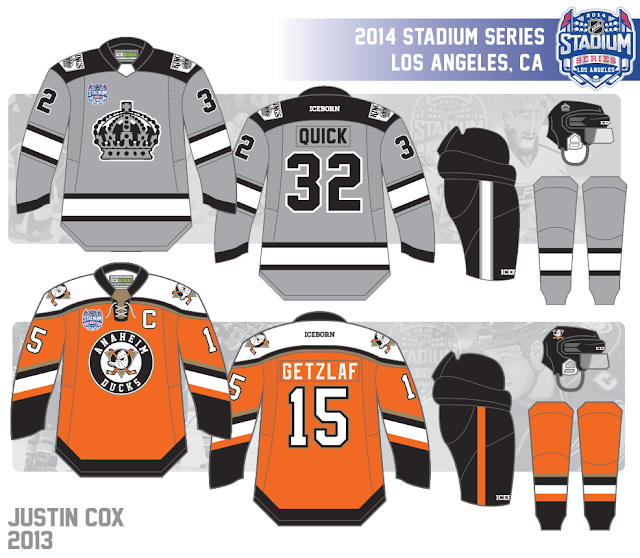 Here is my newest concept, one for the two California teams playing under the stadium lights this next January. With the Ducks, I went with the rumors and created a predominately orange jersey with some variation of their 'Mighty Duck' oval logo. I also decided to base their jersey off of the infamous 'Wild Wing' alternate. Despite the front design and font, it's actually a great jersey, and I think it could be a great look! For the Kings, I decided to tie a few era together. I stuck with their current color scheme, and that of the Gretzky era, and used a jersey design similar to that of the original Kings. However, the main thing I wanted to do was use a logo they hadn't before. Not like this anyways. I used the crown out of one of their old shield logos because, I think it is very well executed and honestly looks better than their other crown logos. I also wanted to do something else the Kings hadn't. They've used every color in their arsenal as a base color except for silver/grey. Now it may be a hard color to do so, but with the King's scheme and identity, I think they could make it look great. After all, this is Los Angeles, why couldn't there be an orange vs silver game?

So what do you think? Let me know your thoughts in the comments below!

More Green for the Stars

Hello everybody! How was everyone's weekend? I had the pleasure of attending the Colorado/Montreal game on Saturday to see my Avs improve with a 4-1 win over the Habs. It was great to see my all time favorite player/goalie JS Giguere in net and former great Patrick Roy behind the bench. But the highlight of the night was seeing former Av, Adam Foote's number retired. Any one else attending NHL games soon? In the meantime, I have another concept today for you. 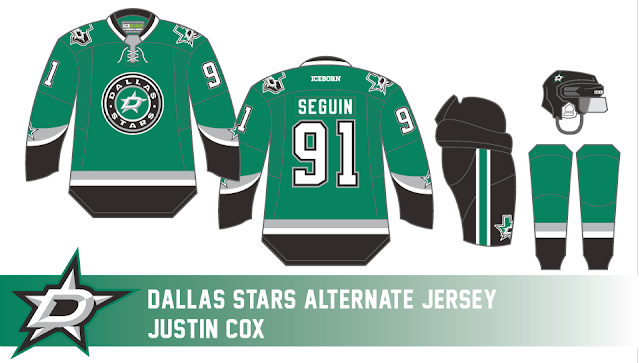 The recent Dallas Stars uniform overhaul was a thing of beauty in my opinion, so any third jersey they introduce should be as well. Here's my concept and I had a few goals with this:

1) Keep green the dominant color, while also introducing a little more black and silver.
2) Turn one of the ugliest jerseys in history (mooterus) into a great one.
3) Incorporate the Stars theme a little more.

So what does everyone think of this concept? Love it, hate it? Let me know!
Posted by Justin at 10:12 AM 4 comments: