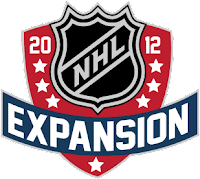 NHL EXPANSION DESIGN CONTEST
I'm always trying to find ways to keep readers interested and a part of the blog. I thought maybe I could start doing contests that we could all participate in. So I present... the NHL Expansion Design Contest! I narrowed the competition down to four expansion cities....

United States
Seattle - Metropolitans were the first US team to win the Stanley Cup and only NHL team ever in Seattle.
Hartford - The Whalers were the NHL team that departed Hartford a few decades ago.
Concept artists can create up to four entries (one for each city) and can revive an old team or create a new identity! Once all concepts are in we will vote for the best concept from each team, then each country (US, Canada) then the best concept overall! . All entries are due August 15th. You can email the entries to jncox9@gmail.com.
Rules: