Canucks Collab & Concepts from Others 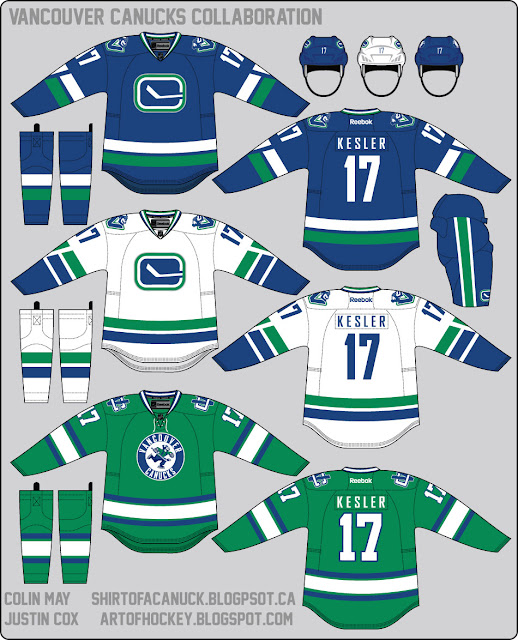 Colin May is a huge Canucks fan and runs a blog, shirtofacanuck.blogspot.ca, devoted to redesigning Vancouver's identity. I myself am a big Canucks fan and ever since their 40th Anniversary Jersey was released, I have thought a similar version would be a cool look for the Vancouver. Colin had the same idea and beat me to the punch when he created some near perfect concepts! Of course there is always room for improvement. Colin had also taken a liking to my Canucks third jersey concept so I contacted him about doing a collab together between the three jerseys. We both loved the idea because not only could we combine our designs, but we were able to improve eachothers! So here is a breakdown of the concepts:

Home and Away:
The away jersey design is almost identical to the 40th Anniversary jersey and a model of the original 1970 home jersey. The biggest change is obviously using the updated Stick in Rink logo and Johnny Canuck logo on the shoulders. Since Colin's mock up was practically perfect, I didn't want to change too much. The biggest change I made was the collar as well as a few small fixes. The home jersey was a little different. The striping on the original 1970 jersey was different than the home jersey and much worse. However on Colins concept he got it perfect! The striping is almost identical to the away version (besides colors and cuffs) and it came out great. My biggest contributions to these were collars, small additions and fixes, and the transfer to my template. On a side not, this project really showed me how something as simple as a "V" on the armstripes could take so much work. 5 revisions to be exact. However after looking at all of the versions, it really makes a difference. That just goes to show how the little details really make a difference.

Third:
My original design had a very modern and unique look to it. But after some discussion, Colin and I threw around a lot of revision ideas for this but we ultimately decided to take it in a more retro direction. We removed all silver and changed the striping to a similar look of the Canucks current third jersey. Lastly we changed the font to the Canucks 40th Anniversary font and it really topped off the jersey. The retro jersey looks so much better in this set in my opinion.

In the end I think the whole set came out great and I had a great time working with Colin. I hope to do it again! You can check out more of his designs at shirtofacanuck.blogspot.ca.

I've liked this concept since it was first posted on HJC! I really like all of the striping, colors and font. Good choice putting the Texas logo on the arm stripes. The primary logo is kind of strange but it still is a cool and unique look. I would love to see a version with the regular logo or maybe even an away jersey to go with this one? Regardless, really great work Alan! You can check out his blog at ajhhjaftw.blogspot.com/.

When I first saw these they struck me as a better/updated version of the Avs edge uniforms. It must be the side panels? I really like the home jersey and I think if a couple of changes were made these could be really great jersey!  My biggest problem with the away jersey is the large amount of burgundy on the arms and sides but then blue yokes are used. It just doesn't seem balanced. I think if some black and silver trim was added as an outline to the numbers and between the colors it would take this concept to the next level. I also think the foot logo would look good on those yokes. Like I told Ricky, it seems like a lot of changes but it's just these small details that will improve his concepts! Regardless of change or no change these are good concepts and would love to see him work at them a little more! To see some more of Ricky's work check out his blog at rmconcepts.blogspot.com. He definitely has the biggest variety of concepts I've seen. It's great!

This is what NB14's idea for this years Winter Classic. I like the Detroit jersey a lot and wouldn't mind seeing it worn! My only suggestion would be to add a thicker, more noticeable outline the the back number. The Toronto jersey is okay but it seems to me like it's just an updated version of their old third jersey. 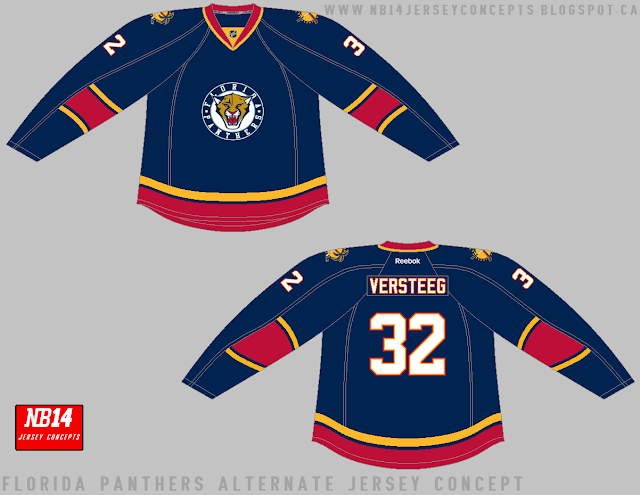 This would be a great third jersey for the Panthers! It goes great with their current jerseys and I think their template looks great in blue! My only concern is that the logo, tv numbers and name need to be a little bigger. To see more of NB14's concepts you can go to nb14jerseyconcepts.blogspot.com.

Sounds similar to icethetics' tournament of logos doesn't it? Well that's where I got the idea for it. It will be a tournament for the best and worsts of the Art of Hockey. From primary logos to all of the jerseys! There is currently a vote up in the top right corner of the page for Best NHL logo and uniforms. For more information, check out the original post or the TOHD page. I would love to hear everyone's thoughts!