If you haven't heard already, the St. Louis Blues' AHL club, the Peoria Rivermen, are having  a contest to design a new third jersey. I may be making some changes but here is my entry as of now. 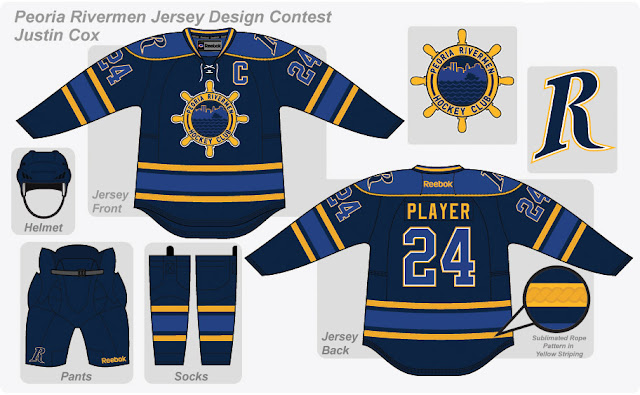 I really love the Blues and Rivermen's color scheme but I didn't want to get too crazy with the jersey design. I know immediately that I wanted to do a navy blue jersey however, I did not plan on using lighter blue yokes. However, with a yellow outline, they look pretty good. The last thing I did to polish off the jersey was add a sublimated rope pattern to the yellow striping. When I exported my file out of illustrator it made the pattern less visible so I added the close up view. Now lets take a look at the logos. 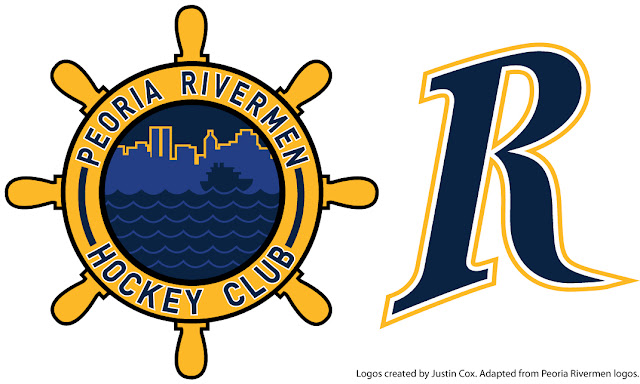 I have never been a huge fan of Peoria's primary logo and I wanted to create my own logo for this contest. Last year Peoria released this logo as a shoulder patch for their third jersey. I really loved the idea of the logo but something about it just wasn't working for me. Maybe it's the waves or the space between the words? I don't know. But I wanted to combine these logos into a new Peoria Rivermen logo. I stayed with the skyline idea but I changed the waves up a little bit and added a boat. Also I didn't want to create just a "typical circle logo." So I created a ship wheel similar to the one in the primary logo. The secondary logo is a modified version of the "R" from the wordmark.

I may make some small changes before submitting this but I would love to hear any feedback you guys have!

Steven G. suggested that I don't use a blue font on a dark blue jersey. I agree with Steven and changed to yellow numbering. I think it works with the design as well as the primarily yellow logo. It would also look better on the ice. 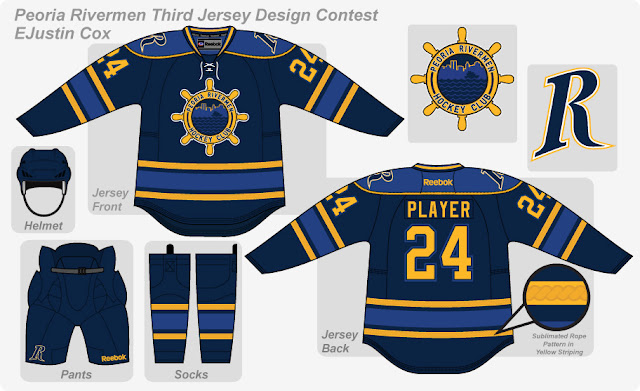 I also created a player model just as an idea. I don't know whether to include it as part of my entry or not? 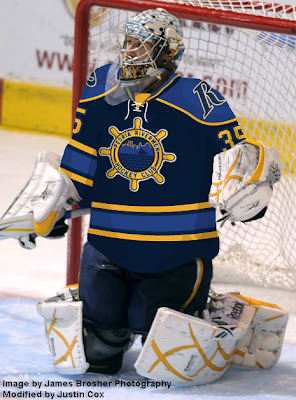