I think we can all agree that the NHL needs more green! I've come up with two Pacific Division re-brands which both include green as their base color!

The Stars are on the top of the list of teams that need a redesign. I've created a new bullhead logo based on the stars old third jersey logo. I was originally going to use it as the alternate logo but it came out much better than expected so I promoted it to primary! I modified the inside of the star logo as well as the colors to use the classic logo as a shoulder patch. The striping is based off of their old, black third jersey the incorporate the "stars" theme a little more. Finally I had to add their big offseason pickup, Jaromir Jagr, to the back! 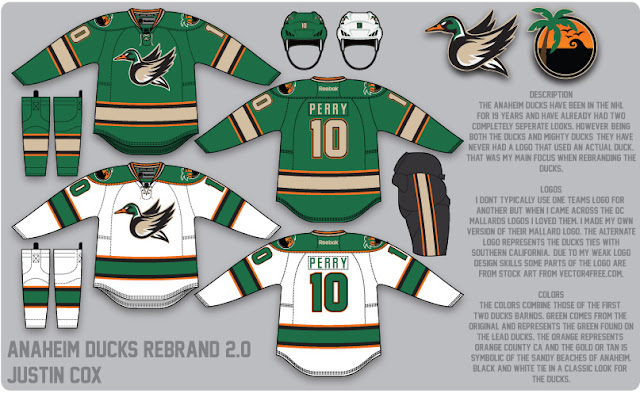 I finished this concept a while ago. You may have also seen my first version on HJC a while back. The logo is based on the Quad City Mallards flying mallard logo. However, I changed the orientation of the whole duck and redrew everything in illustrator so I wouldn't just be slapping one teams logo on anothers jersey. The alternate logo is meant to represent Southern California. You can read a durther description on the concept!

As always I would love to hear any comments and critique you have. Thanks for stopping by, The Art of Hockey!